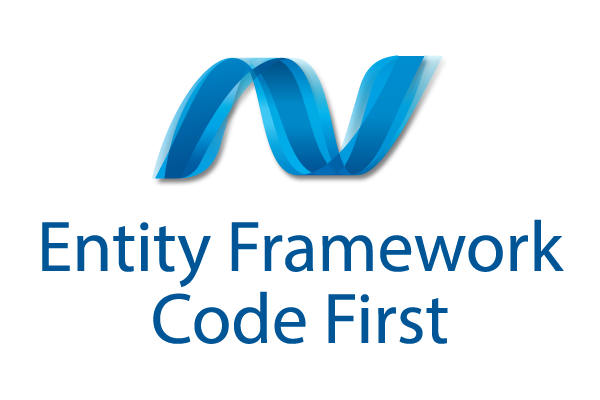 To start off it is probably worth mentioning what the Entity Framework is and why it is important in software development and also what Code First means.

In the past, developers coded either directly from their application to a database. The application would either populate tables or call database server functions or procedures directly. If a database object changed or you needed to switch to another database then coding changes were required quite often ending up in a rebuild. Some people built separate business logic code or added other tiers to their applications so that not everything needed to be rebuilt when you had to make a structural change to say the database or switch servers. If you were to switch from say Oracle to SQL Server then this data tier or even the whole product would need to have a major overhaul. Quite a lot of developers, myself included, started to build a data abstraction layer so that switching servers or making changes did not affect the code (at least existing code would still run).

From memory, I think Microsoft created Data Objects around 2005, which was a first attempt to standardise their own database abstraction layer. A few years later and Entity Framework (EF) was born to replace Data Objects and included lots of powerful features.

The theory is that if I want to switch from one relational database provider then I do not have to rebuild my code, just a few configuration changes and I’m done. I’ve never tried to switch from say Oracle to SQL Server using EF myself.

What really got me excited was a few years back when Microsoft added the Code First approach to the Entity Framework. Code First means the developer writes the classes to handle all of the data interactions and storage that is required and Code First builds those structures for you in the database. Also, Code First allows reverse engineering of an existing database into appropriate Entity Framework classes although I don’t cover that here. You can add test data to your database within the deployment giving you the same data each time you run or install it.

In the examples, I’ll use SQL Server Express LocalDB as that was included in my Visual Studio 2017 installation but any SQL Server version will do the same thing. 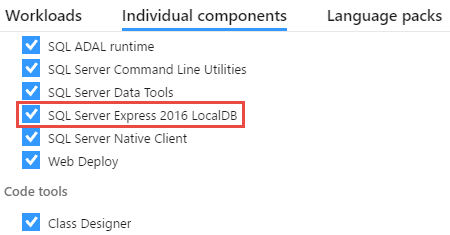 If you are using SQL Server (2008 onwards) or SQL Server LocalDB then you do not need to download any drivers for Entity Framework.

SQL Server Management Studio will also be useful and I will use it in this article to verify the database objects have been created but it’s not essential to have (as of time of writing version 17.2 is 783 MB). If you need to download, then here are some links.

In Visual Studio I can create a SQL Server Express LocalDB database by right-clicking on Data Connections in Server Explorer and selecting Create New Database. Then entering “(localdb)\MSSQLLocalDB” as the server name and “PatTest” as my new database name when prompted (keep Windows Authentication too). I will not be using this database but this is just to explain how you can create a database from Visual Studio. 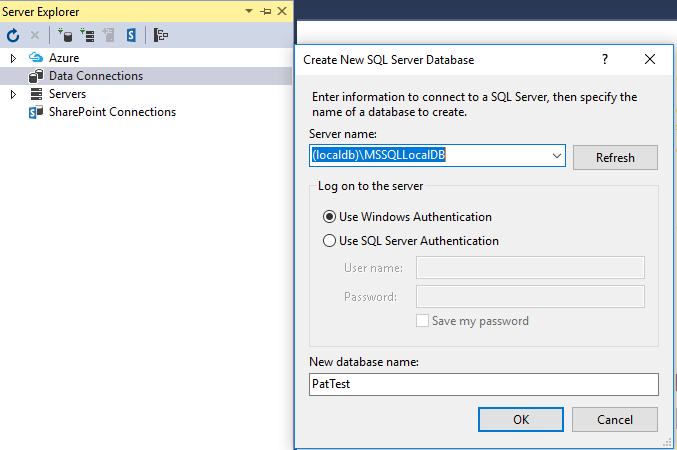 You can also see the new database by connecting to the “(localdb)\MSSQLLocalDB” server using SQL Server Management Studio. 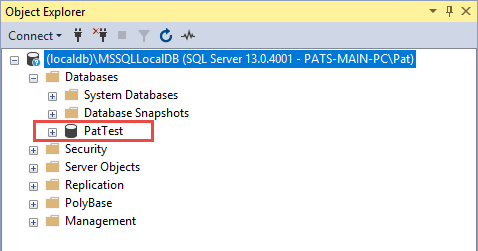 Somethings to note about LocalDB:

Note that you do not need to use a particular Visual Studio project type or even the LocalDB. Any .NET project will do and any SQL Server version.

Next up, I will include the connection to the database in the Visual Studio project but before I do that I’m going to change the name of the data connection to “PatTest.dbo”. 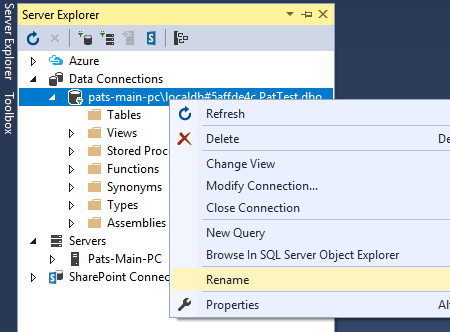 As a side note, you can see the database objects within a Visual Studio project by using the “Browse In SQL Server Object Explorer” command. 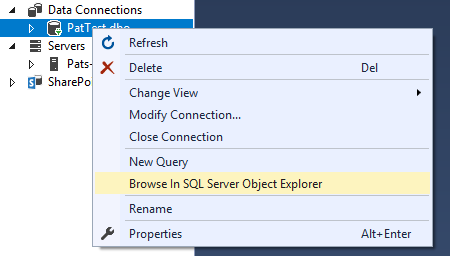 Entity Framework is not already included in Visual Studio so to start with, I’ll create a project and then I’ll open the Package Manager and install it. There are other ways to install it not covered here. 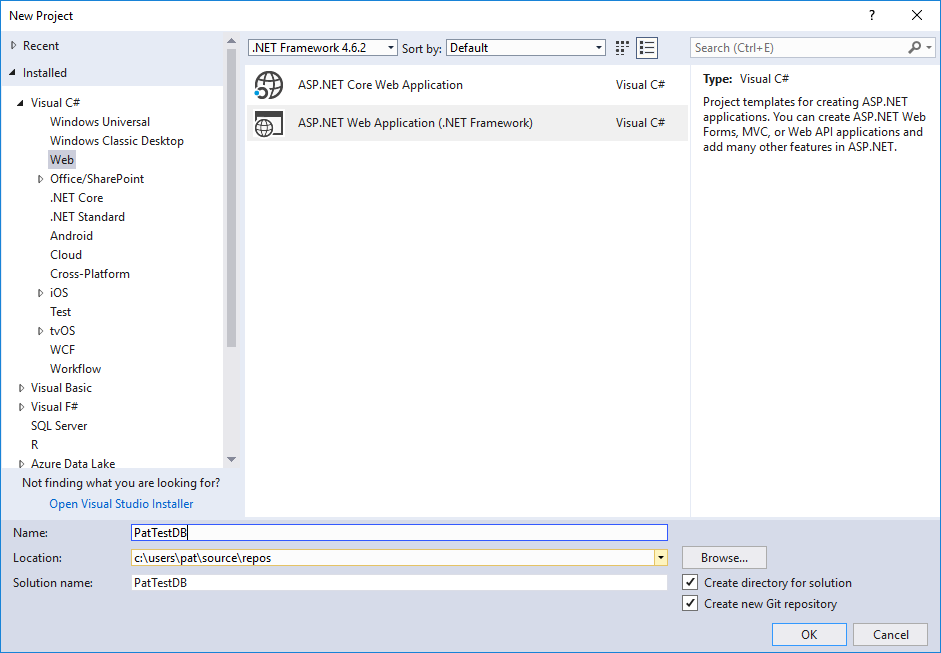 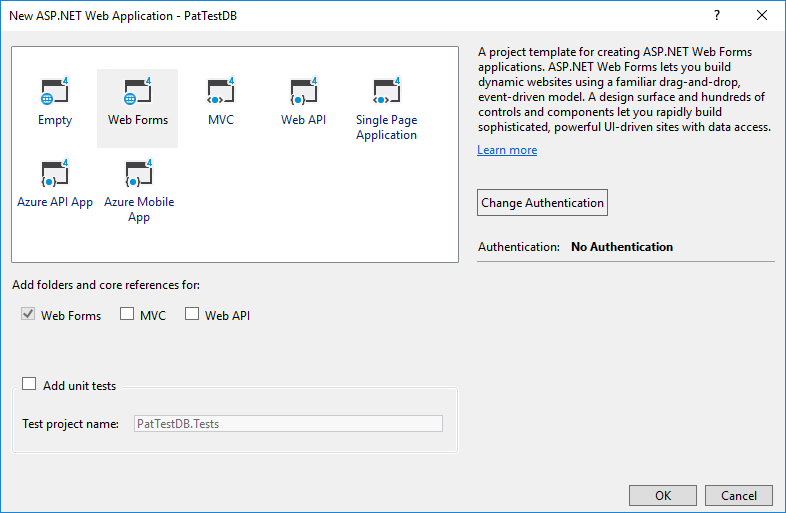 The Package Manager is hidden away in Visual Studio under the View menu by selecting Other Windows and Package Manager Console. Then you need to type the following and enter.

The database created will be used to host a simple relational database but with Code First, I am going to write the code to generate the tables in Visual Studio classes.

In this example I will create a simple work list. There will be User and Project objects. A Project is made up of Step objects and each Step is assigned to a User. I’ll add some classes to represent those objects. 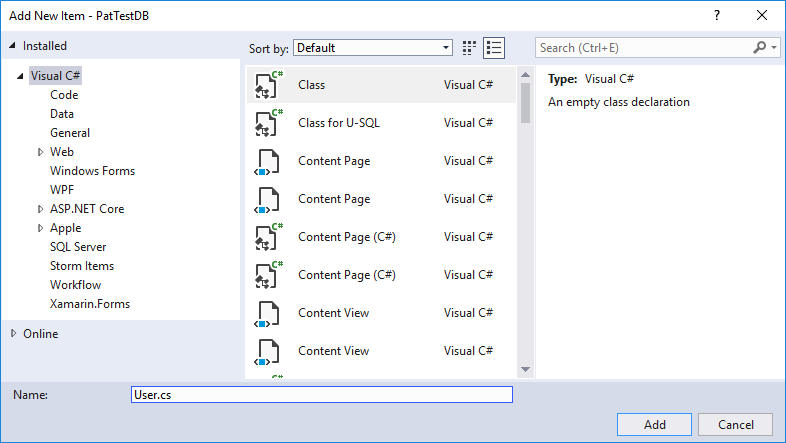 We’ll add DataAnnotations and some code to the User and Project classes. Near the top of each add:

The code that fits inside the curly brackets of each public class needs to be modified as follows: 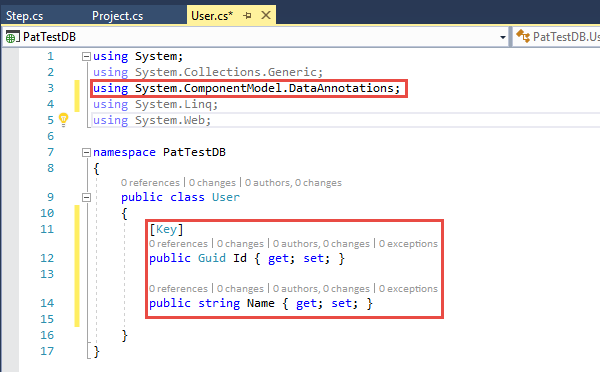 The Step class will have foreign key relationships so it requires DataAnnotation.Schema to be added near the top of the class code.

The Step class code will include an order that the steps should be completed in as well as the detail involved in the step. The code, including foreign keys is as follows: 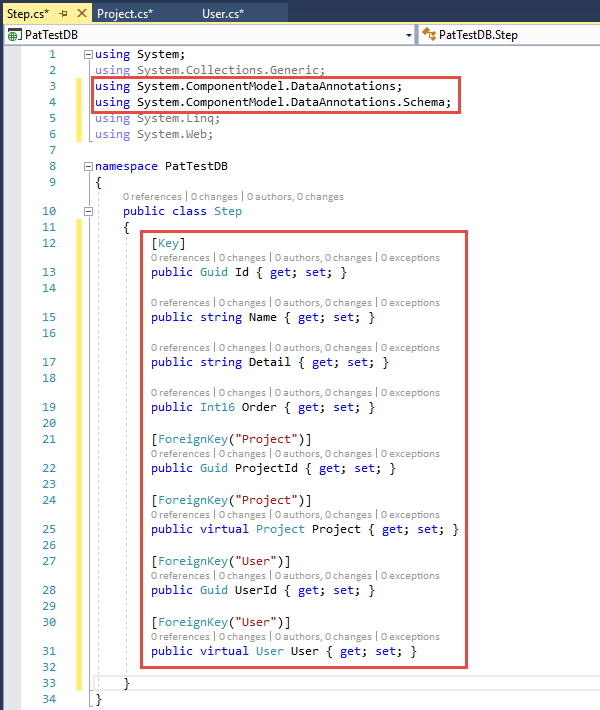 Save the classes. Create a Models folder in eth project and drag them into it. Then create a Services folder and add another class to that called PatTestContext.cs.

The PatTestContext class inherits from DbContext so it requires Data.Entity to be added near the top of the class code.

The PatTestContext class code will have “: DbContext” added to the public class line to indicate its inheritance. Then an empty constructor and a “DbSet” for each object. The full class code is as follows: 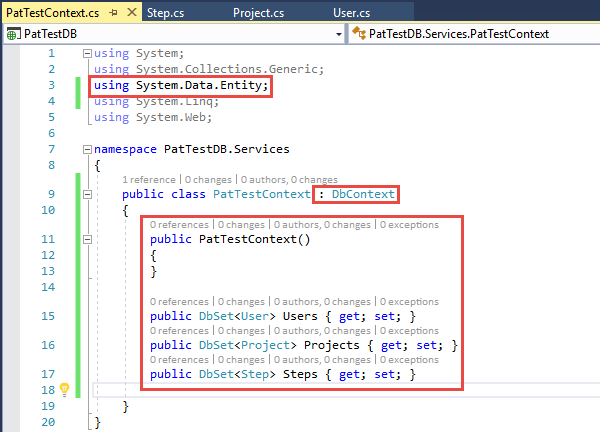 Make sure the class is saved and then go back to the Package Manager to enable code first migrations and then add an initial migration.

After you run the Enable-Migrations command you will have a new class created under a Migrations folder in your project called Configurations. The Add-Migration Initial command also created a class under this section suffixed “_Initial”. 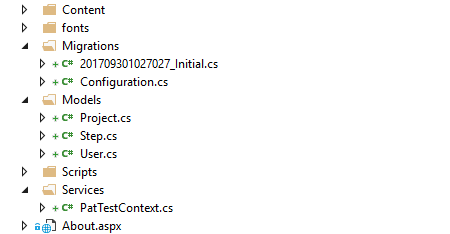 This next step is not actually required but here I will add initial data to the objects. I will add one project, two users and a few steps. You do this by adding to the Seed method of the Configuration class. I will hard code the Guid’s for these. Here’s the code to add to the Seed method (overwriting the existing comments).

Save the Configuration class changes. 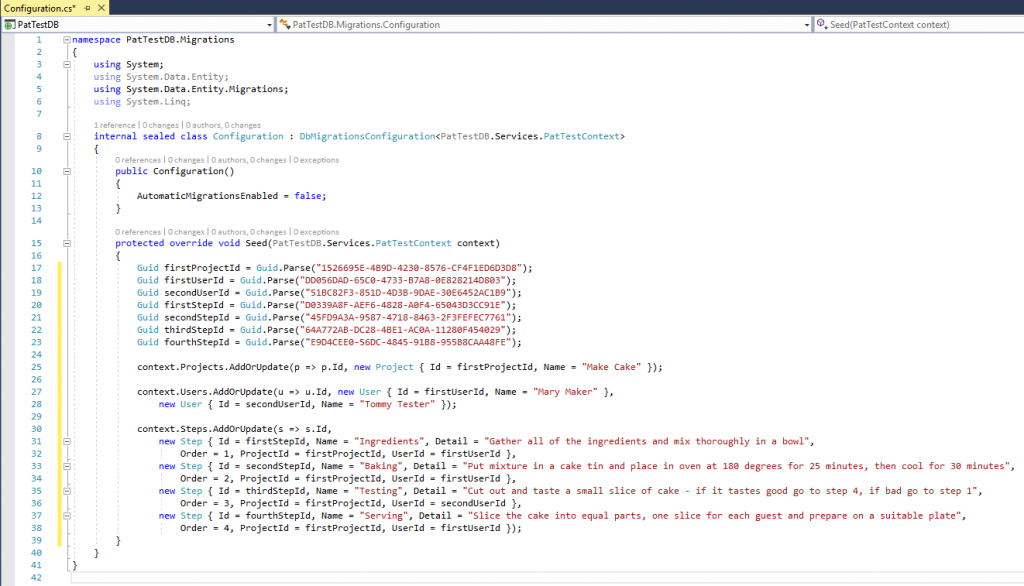 Now it’s time to update the database from the Package Modeller with the following command. 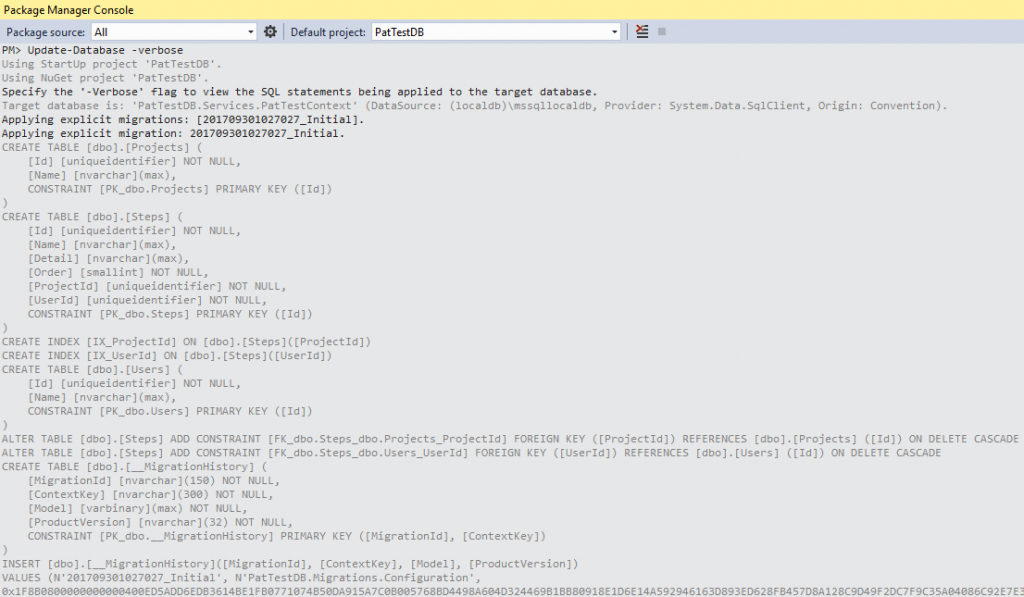 To check you can use Visual Studio Server Explorer to connect to the new database. 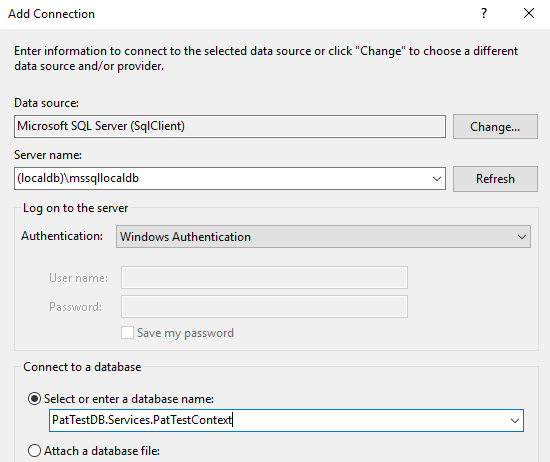 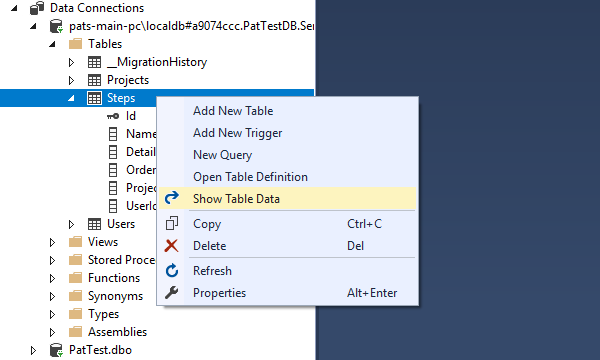 Or use SQL Server Management Studio to see the changes independently of Visual Studio. A simple query such as “SELECT * FROM Steps” will show the seeded data.

Of course, the next steps would be to create my interface and show the data on a page, provide editing and adding capabilities but this article has become long enough.

You can also reverse engineer an existing database to the Entity Framework Code First model but I will save that for another day.